Shauna and Zaylee Fryar’s Back Story: On May 1st of 2011 Zaylee and her mom left to go to the store and Shauna was murdered. She was found in the Cumberland river but Zaylee was, and still is nowhere to be found. For more information click this link to be redirected to charleyross.wordpress.com

The Begining: A Crime of Passion

It all started with what should have been a short trip but it was one that was also sudden and unexpected. There was frustration with a person in a likely romantic relationship. She was expecting some kind of surprise. Many speculate that Shauna was buying drugs and that is possible, but she could have been expecting a setup as well. I can not say that I believe this trip was planned. As this relationship hit the rocks it resulted in tempers and emotions becoming combative. She was in danger and she probably knew that as they left. After being picked up they went to a house and likely continued to argue. Things accelerated and got over blown. Shauna’s murder was the result of something said or done innocently in a social context or setting, she was being ostracized. Her accidental behavior triggered a serious response and stirred up misunderstandings, deep passion, resentfulness, and anger in someone. 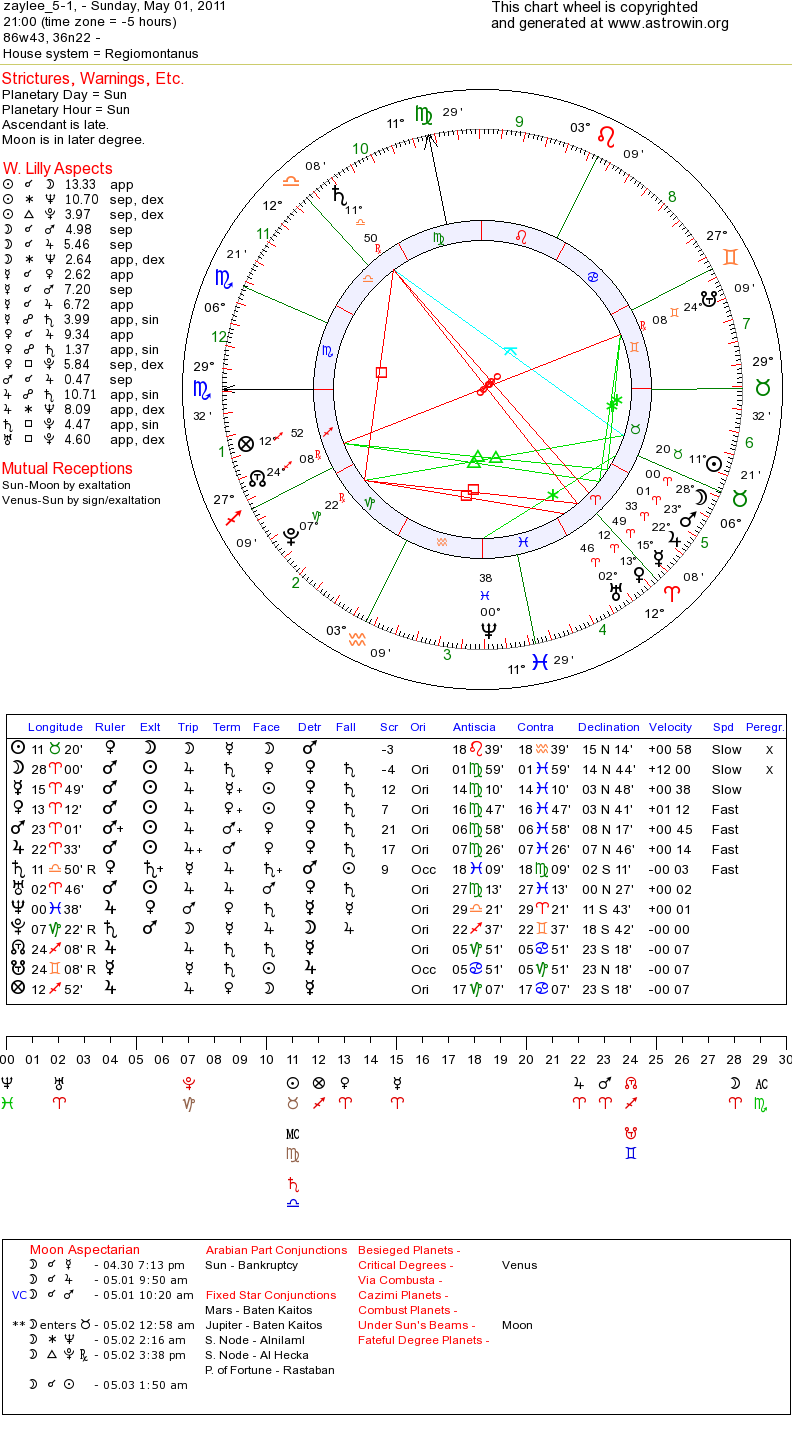 The late Ascendant and degree of the moon show us that it was already too late to save Shauna and Zaylee at the time they were reported missing. Where ever Shauna and Zaylee were brought the environment was an uncomfortable one. With the Path of fortune conjunct fixed star Rastaban in the first house which represents Shauna, it can show criminality and impulse as well as blindness physically or metaphorically. Ptolemy associated poison with the stars in the constellation Draco. The path of fortune squares the midheaven and fourth house cusp which could show poison or drugs in the house Shauna was at as well as criminality. The person who owned the house or rented it is ruled by Neptune sense Pisces is on the cusp. So it’s possible that there are Neptunian things involved here. Neptune rules drugs, illusions, confusion, seclusion, and undoing. Jupiter was the traditional ruler back in the days of medieval astrology but in ancient astrology, it was the sun who ruled the fourth house. We can see that the sun is conjunct the Arabic part of Bankruptcy. Maybe this person was in need of money? Looking at Jupiter the planet of self-indulgence we may be dealing with a person who is in pursuit of pleasure. A person who may be a bragger or prone to exaggerating stories. He may be interested in far off places and travel. Always seeking ego recognition. Should the person be educated he would thrive in communication sciences. He is also rash in his actions and quick to anger. Since this person enjoys seeming larger than life. He may often pretend to be doing better than he is financially by trying to show off his assets such as cars, his home and so forth. His car would be a big deal for him and he may try to travel in luxury or at high speeds. Sexual as well as respiratory problems can be present for this person. He is inclined to lying but does so by manipulating data and omitting facts to benefit himself.

Jupiter with Baten Kaitos is described by Manillus in a lengthy way, one quote was chilling in my opinion, “when the victims lie dead along the shore, a second slaughter is perpetrated on the first; the fish are torn into pieces, and a single body is divided to serve separate ends.” I was left to try and consider the meaning of his statement regarding this fixed star and wondered what it could imply. We know Shauna was killed but was Zaylee? Could this allude to the mother and child being separated? Zaylee was separated from her mom but at the same time did come from her body. Were they divided to be killed or divided so some one else could raise her? I hope for the latter. Supposedly Baten Kaitos is good for recovering what is lost I hope this means Zaylee will be recovered and not just Shauna. With Mars and Jupiter conjunct we can see that there is a part to play some situation on the mother and child’s part. Jupiter does expand though so circumstances and potential could have been good for Zaylee. I can’t help but wonder if some one had a plan to separate the child and mother prior to Shauna leaving the home. Were they trying to steal Zaylee and give her to someone? I feel like this was an organized effort. I can’t say the effort was to give the baby to some one else, I am on the fence about it being a potential robbery or an abduction. Baten Kaitos was the beast in the story of Andromeda. She was chained to a rock and left as a sacrifice to the beast by her parents. Perseus rescued her and killed the beast. For more on the back story of Andromeda and Cetus the beast click this link

I had initially done this reading to gather more information on locating Zaylee. The information in the chart regarding Shauna and Zaylee was intermingled and difficult at best to untangle. I am not convinced that Zaylee has passed after reading this chart so I have decided to do a horary chart to try to get more information about Zaylee and where she may be. I have glanced at the chart, and it doesn’t look like a happy ending but check the blog out next week for Zaylee’s reading. I encourage readers and searchers to look at the Astro cartography map I made for Zaylee out of this chart to see if any key areas of interest are intercepted. I will make one from the horary chart as well.

Welcome! My name is Michelle, I am student of astrology. I spend my free time practicing forensic and Horary Astrology in regards to missing or murdered people as well as personal readings. For the sake Of science I enjoy trying different methods of reading at the same time in some cases. When I am not doing personal, and forensic readings I enjoy looking at eclipse charts, and testing asteroids with astrocartography charts. Forensic and classic astrology are my favorite, Asteroid Astrology is interesting to me. I have been dabbling in that alot lately. If someone you love is missing or has a cold case please ask for a free reading from me. If you would like a personal reading please visit my website, AdviceAstrologer.com View all posts by advice astrologer