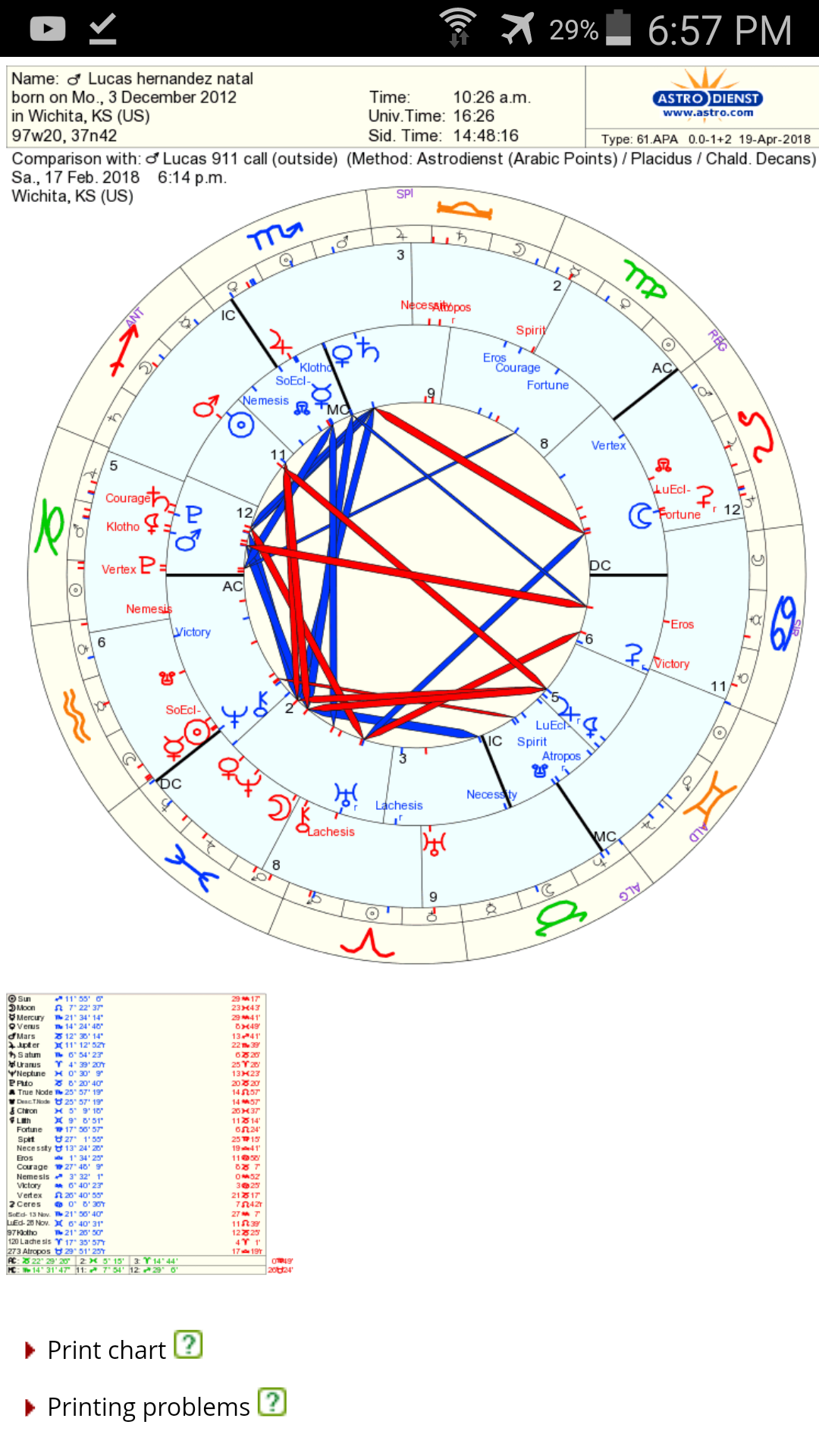 In Lucas’s reading I only read certain aspects.  I ignored the trines and sextile aspects because I am not dealing with a happy situation.  There’s a number of concerning things shown when we compare the 911 transits to Lucas’s natal chart.  Firstly we can see transit Pluto and the vertex conjunct the ascendant. The vertex can be a very intense, explosive point.  Seeing it paired up with Pluto the modern ruler of death, intensity, murder and power plays on a sensitive angle that signifies Lucas himself is unsettling. Solar arc Pluto is conjunct Mars. This also brings up brutality and force. The Sun conjunct Neptune can bring issues involving illness,  deception laziness and inattentive authority figures. Knowing that the sun rules Lucas’s life force this aspect may show the mystery of wether or not he is alive.  I would have to say that it can indicate deception on the part of his authority figure. So as the 911 call takes place we can imagine a possible confusing scenario tinged with dishonesty as mercury the planet of communication is conjunct Neptune the planet of deception. This can show travel over water or near it. Mars conjunct the Sun shows us the possibility of head injuries spinal injuries and physical confrontation. Jupiter with natal mercury shows us travel again. Things possibility getting blown out of proportion can occur, for example something said might be turned into a bigger deal than it should be.  Saturn square uranus might show instability in the elders in Lucas’s life.  Older authority figures can become frustrating or even explosive as uranus is an explosive planet.  Saturn conjunct Pluto can show the ultimate loss of control in a situation which is what deat is essentially.  It can show an abuse of power, disappointment and use of power.  Neptune square the sun can bring themes of confusion,  deception,  poverty or elusive resources.  There’s a sense of the ego dissolving.

Lucas’s natal moon conjunct transit anareta, the killing planet, is indicative of a female perp in my opinion sense the moon naturally rules women and the mother.   This point opposite the point of violence is chilling.  The transit point of death conjunct Lucas’s natal pluto is sad at best.

The sun in the 7th house can mean many things but in this case I suspect that it shows open conflict,  domination,  and opposition.  Mercury in the 7th can show open enemies as authority figures and issues surrounding legal matters. Mars in the fourth shows us an angry, possibly violent scene has happened at home. Jupiter in the third can show travel. Did some one else have lucas at the time of the 911 call and dispose of this little guy? Saturn in the 5th could indicate Lucas was stuck caring for his sibling quite a bit and possibly that day. Neptune in the 7th shows us other people lying.  There were difficult standards Lucas had to live up to.  Deception is abundant at the time of the 911 call. Neptune is also very capable of bringing up confusing legal agreements.

When attempting to analyze the possibilities regarding a location for Lucas I came up with a radius of 1-2 miles using Lily’s 8 indicators and Goldstein’s method against his natal chart. Usually I only use these methods with horary charts but figured it is worth trying if it can help. The direction was different from the horary chart as this time I came up with North east, not south east. Lucas’s ruling planet is in Scorpio showing us he could be with or in garbage, lost and gone forever, near water, refuse, swamps, marshes, cemeteries, places connected with death, with other people’s valuables or hidden.

Although the reading is unfortunate I still have to hope for the best and pray that he comes home safe.

Welcome! My name is Michelle, I am student of astrology. I spend my free time practicing forensic and Horary Astrology in regards to missing or murdered people as well as personal readings. For the sake Of science I enjoy trying different methods of reading at the same time in some cases. When I am not doing personal, and forensic readings I enjoy looking at eclipse charts, and testing asteroids with astrocartography charts. Forensic and classic astrology are my favorite, Asteroid Astrology is interesting to me. I have been dabbling in that alot lately. If someone you love is missing or has a cold case please ask for a free reading from me. If you would like a personal reading please visit my website, AdviceAstrologer.com View all posts by advice astrologer